On Sunday (08.03.2015) we tried to climb the Plattkogel Eisfall (Plattkogelfall) in Sellrain near Kühtai. Only limited information about this icefall is available on the internet with no or only few successful attempts. On the internet site bergsteigen.com a description is published including a difficulty rating of WI 3- for the climb. 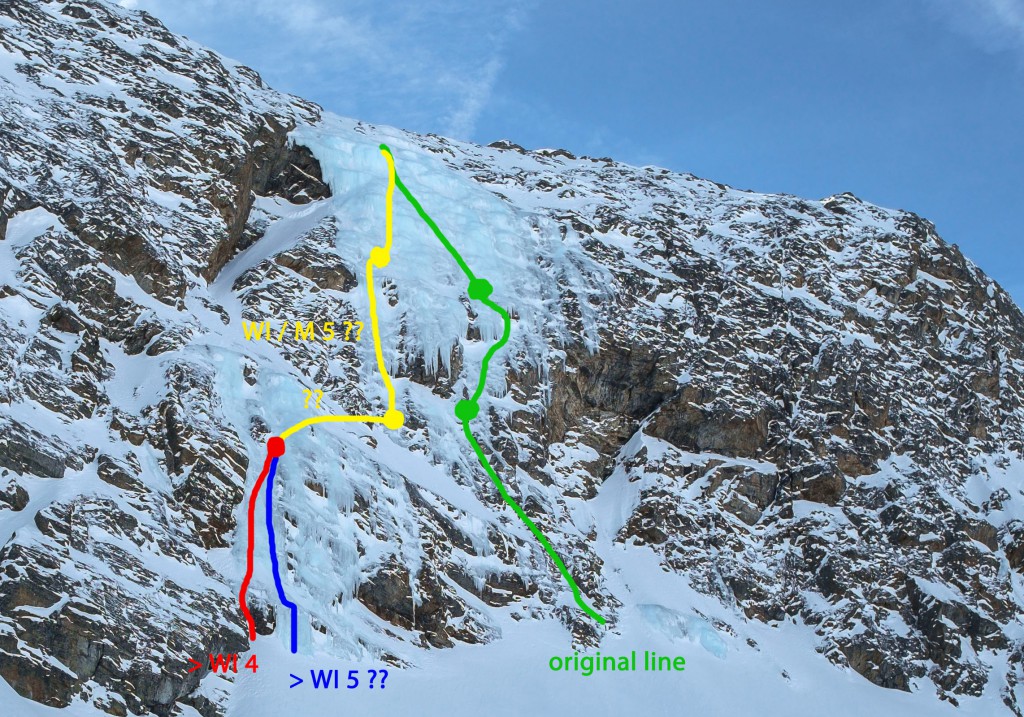 As you can see on the photo in our case the original WI 3 ice line did not form and is probably only climbable as a mixed line of unknown difficulty. We choose to try another line which is shown in the photo in red. This line has several sections of almost 90° ice and therefore a grade of at least WI 4 seems reasonable. The idea was afterwards to climb the yellow line, which, however, seems to be a very hard line probably with some mixed sections. My guess is a grade of WI / M of at least 5. Next to the line we climbed, several hard lines are possible (as indicated in blue). I would assume that all these lines located more to the right are at least WI 5, since long vertical parts are present.

In addition to the already steep pitches, the ice was very hard, brittle and unclimbed, which even increased the subjective difficulty.

In our opinion, the Plattkogel icefall is typically a much harder climb compared to the WI 3 difficulty as indicated on the bergsteigen.com website (or in the Tirol guide book). It seems, that in most years the „easy WI 3 line“ does not form. Therefore, this climb should be considered as a serious climb (WI 5 with mixed sections).