Since my first unsuccessful attempt in March 2015 the so called Plattkogel icefall (or Plattkogelfall) in Sellrain near Kühtai was on my list of failed routes I had to retry ;-)

In 2015 the original line on the right side of the icefall did not form and we chose to climb the left part of the icefall, which felt significantly harder than expected taking into consideration that this icefall is described by the topo of the bergsteigen.com website as a relatively moderate climb (WI 3 max). We ran out of time and had to retreat.

This year during Easter (i.e. end of March 2016) we had the option to go climbing the Renkfall or to retry the Plattkogel. Many recent reports of 2016 about the Renkfall were available on the internet suggesting pretty good conditions (although being in the sun quite early).  Consequently, good hooks, many tracks in the ice and of cause potentially quite a few aspirants trying to fetch the last ice in 2016 (below 2500 m) had to be expected.

In contrast, no recent information on the Plattkogelfall was available, and, therefore, hopefully no recent attempts had been make and no other party attempting this fall would be present. However, no information on the internet also means that the risk of a potential failure is high since it is unclear if the fall is climbable at all… no risk, no fun ;-)

We got up early, took all ice climbing gear + some nuts and friends and started the approach of about 2 hours. Once we could see the whole icefall, we chose to climb the original line, since more ice than last year was present and the left side of the icefall had been climbed and an Abalakov sling was visible. The route on the right side, however, seemed to be unclimbed in 2016 (no traces or slings were visible). We managed to climb it in three pitches and indeed it was completely unclimbed :D My personal grading based on the conditions in 2016 are: 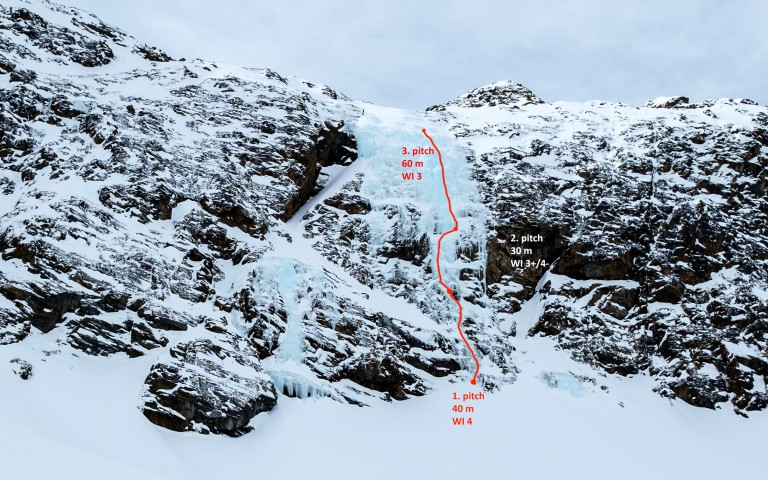 In summary, the Plattkogel icefall is a great alpine ice climb and must not be underestimated based on the bergsteigen.com topo. The first pitch is the crux and several other (mixed) lines might be possible in the middle section. In 2016, an overall difficulty of WI 4 seems resonable.